The Road to Revealing Queer: An Interview with Curator Erin Bailey, Part II

Recently, Jana Greenslit, Incluseum contributor and intern (read more about Jana on our About page) sat down with Erin Bailey to discuss the Revealing Queer exhibit at the Museum of History and Industry (MOHAI) and the project the exhibit emerged out of, Queering the Museum.  Because Revealing Queer has recently opened and is on view to the public we hope that this interview:

The Incluseum is particularly excited about the way the Community Advisory Committee structure was applied for the first time at MOHAI through this exhibit.  Erin’s commitment to the CAC model and her desire to share leadership and agency over the exhibit with LGBTQ identifying community members invested in issues, work and advocacy for LGBTQ communities in Seattle is one of the defining aspects of the exhibit.  When you attend Revealing Queer you know that the narrative is not the product of a sole, disembodied curatorial voice.  Rather, what you experience is a narrative crafted from the exchange and discourse amongst directly involved stakeholders. As Erin has stated, when there is so much diversity within the grouped identities of LGBTQ identifying individuals, it is so important that at least some of that diversity can be represented at the table to add accountability to the exhibit process.  This post is the second part of the two part interview. You can read the first part here.

J: When you were setting out to develop the Revealing Queer exhibit, did you have any specific outcomes or goals in mind?

E: I wrote impact statements, yes. I’m going to paraphrase, as I wrote them at the very beginning and referenced them a lot but I haven’t looked at them in months. First, it was to develop a deeper understanding of LGBTQ communities in Seattle. It was to make Seattle fall back in love with itself because of the LGBTQ community. Also, it was getting these stories into the narrative and the archive of the museum. Now learning outcomes were a little bit different because we wanted people to be able to understand queer history. Just generally speaking, even people who identify as LGBTQ don’t know their own history, which is problematic. We also wanted it to be a de facto community space. We wanted queer communities to come in and feel that this was theirs and claimed and comfortable, and that MOHAI as an affiliate proxy was also a queer space that they could claim and use as they needed to. We wanted to develop relationships between community organizations and MOHAI, between staff members and community members. We wanted people to learn about how to talk about LGBTQ people, how to understand the experiences that they lived, and to make connections between queer experiences and non-queer experiences. Because there’s a lot of really similar experiences between the two. I may have this non-normalized sexual life, but I’m also a pastor. Or I’m also a teacher. Or I’m also a researcher or a scholar or a mother or a father…the list goes on, literally an infinite list of other identifies that queer people carry with them.

J: What would need to happen with this exhibit for you to consider it a success? What do you hope to happen from this point on from the opening of the exhibit? How are you going to measure that success?

E: I think that success evolves. I don’t think that success can ever be fully predicted, and if you think you can, then I don’t think you’re thinking critically about what you’re doing. You can measure success in attendance. You can sell 500 pre-sold tickets to the opening. That can be considered successful. People have cried in the exhibition already. That can be considered successful. The director came to me and said, “Erin, I think you’ve really done something special here.” That’s definitely something I would consider successful. But I wonder if we can measure non-quantitative success before it happens. I have no idea how the community’s going to respond to this. I have no idea the impact it’s going have ten years from now. I have no idea the percentage of MOHAI’s collections that are going to increase because of the acquisition of queer objects. All those things could be considered successes. But the fact that MOHAI is doing it, and has learned about queer and the philosophies and theories behind it, and has adopted that into the mentality working through the rest of their departments…I think that is success. So it’s a hard question to answer but with a lot of possibilities. The fact that MOHAI developed this gallery as a new model and used the Community Advisory Committee in the gallery space might also be considered a success. Is it a big success for me? I don’t know. Is it for MOHAI? Maybe. It’s just that every individual person has a different definition of success, and so on that account we should ask everybody or have a focus group on what success looks like based on this exhibition.

J: Is this the first time MOHAI has used the Community Advisory Committee (CAC) model for an exhibition?

E: Yes, this is the first time. They have worked with community groups before, and I have no idea how they developed their exhibitions, but my understanding of it so far is that the community groups would come to MOHAI and say “I wanna tell a story about houseboats,” and then they would develop this exhibition and MOHAI would install it. There’s never been a long-standing community driven narrative working through MOHAI’s design team in that capacity, as far as I know. Half of the reason MOHAI wanted to do it was to see how it could work in a history museum setting, in a new space…in addition to the value of community narrative. 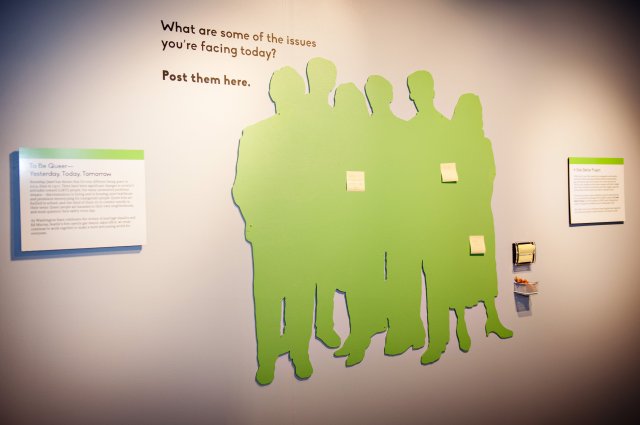 A Wall With Space to Participate – Soon it was Filled! Photo courtesy of Barbie Hull Photography.

J: Was this the first time you’ve personally worked with this model?

E: Yeah. I learned when I interned at the Wing Luke Museum, or at least got to see the working of it. I only interned there for a summer so I barely had any background knowledge with the Southeast Asia exhibition that I worked on. My role in that was very small.

J: Now that you’ve gone through the whole process, do you have anything to say about this particular model? Pros or cons?

E: I think it’s a really great model because it’s so flexible. I think that if someone were to open up The Wing Luke Museum’s book on Community Advisory Committee models and followed it to a tee, they’d be doing themselves a disservice. I really think you need to adapt it and make it whatever you need it to be for your context. Make that happen. If you already have strong ties with whatever community, and you don’t necessarily need the CAC to keep building those ties, but you need them to still reach out to certain members of the community, than a secondary level of outreach.  If you have an in-house expert in something, they could be a part of the process. It’s more about using the resources you have internally and then pulling the resources that are critical from the community that you don’t have and merging it together.

The Wing Luke Museum has noted some of the limitations with the model, for example it’s super labor intensive. I literally had to bring every single part of myself to the table every single time I walked into a CAC meeting. I had to be completely transparent about who I am as a human, people in my life, and the experiences that I’ve had. I had to come out 14,000 times in the process, which is fine with me. I have no problems coming out, but continually putting those emotions and not only the best emotions out, and being able to manage that in a really positive way is something that takes time to refine. To consistently do it over and over and over again takes a little bit of a toll on you. But the rewards from it are very important, like getting to sit around a table with 12 people who are the pioneers of queer communities, activism, and community organizing. Not only are they affirming your history, but you’re learning from them, and they’re learning from you. You realize that you have the 12 best parents sitting around a table telling you, “you done good kid,” or saying, “This is so different from my experience. I find that so fascinating. Let’s talk about it some more.” Having that kind of relationship where you have all these queer icons I didn’t have growing up was so important for me. There were times the emotions were really high in that capacity so it became a binding agent that allowed the CAC and myself to function successfully. I think that’s something people don’t always note about it.

J: Do you have anything you’d like to add?

E: Yeah, the exhibition is open until July 6, 2014. We’ll have a history café on February 20th where we’re talking about the role of community history projects in regards to the archiving of community history. We’re looking at how artists, scholars, and community workers work together in different capacities to create these types of projects. We’re also doing a collections initiative with MOHAI, so they’ll be building their collection as a result of this exhibition. We’ll be having a family day in June during Pride Weekend, which is going to be fun. I really do hope that everyone comes to see the exhibition and I would love if they shared their thoughts with me because I think that’s really valuable. I’m totally open to the world having my e-mail address which is problematic but whatever. I opened up that can of worms like a year ago, so what’s a few more? I really do want to talk to people about it and I really do want to hear what they have to say. I’m looking forward to hearing from folks from around the Seattle area and their perspective on things. Good or bad. We’re open to it.

← The Road to Revealing Queer: An Interview with Curator Erin Bailey, Part I
Re-thinking Narrative Production in Museums through Digital Storytelling Workshops →