Did you know that MuseumNext hosted its first conference in the U.S. last month? Since neither Aletheia nor I were able to attend, I asked Alyssa Greenberg from #MuseumWorkersSpeak to share her thoughts and impressions with me. They became formalized in the following blogpost. If you want to continue this conversation, please join today’s #MuseumWorkersSpeak Tweet chat from 2-3pm and 8-9pm EST. If you attended the conference, we would also love to hear your thoughts in the comment-section below. -Rose

On September 25-26, I participated in MuseumNext’s first stateside convening at the Indianapolis Museum of Art (IMA). Since 2009, MuseumNext has organized annual conferences in cities across Europe to highlight current best practices and future directions for the museum field. Starting with Indianapolis this year, MuseumNext will hold conferences annually in the fall in the States and in the spring in Europe. This fall’s topic was “Building Inclusive Museums” (not to be confused with the International Conference on the Inclusive Museum — though it’s great to see the topic gaining increasingly widespread attention).Through two days of jam-packed conference sessions, the themes explored ranged from sharing power and authority with museum audiences to fostering more inclusive hiring and labor practices within institutions. In this blog post, I’ll share two of my greatest takeaways from the conference.

There were at least as many definitions of inclusion as there were speakers at the podium. Something that came up again and again was the idea of sharing power and responsibility with communities beyond museum walls. For example, Independent Curator and and Public Engagement Consultant Sarah Schultz used the Open Field project, which she founded at the Walker Art Center in Minneapolis, as a case study to explain how inviting  “community members” (a phrase that merits further? unpacking!) into the process of creating public programming is essential to creating an inclusive space. Similarly, in the realm of exhibition development, Smithsonian Curator Masum Momaya advocated engaging community members “from concept to closing.”  Manager of Digital Content/Social Media Lori Byrd-McDevitt shared a case study of a “community blogging” initiative at the Children’s Museum of Indianapolis.The museum demonstrated “radical trust” by allowing selected bloggers free rein to create content for their website. Byrd-McDevitt anticipated that questions of compensation might arise in the audience, and she was clear that community bloggers received the benefit of blogging experience as well as perks such as meals, goodie bags, access to museum events, and museum membership — but not financial compensation.

The question of financial compensation for community partners arose again during Nina Simon’s presentation, when she described a community engagement project wherein “homeless volunteers” worked on landscaping the Evergreen Cemetery, which is owned by the Santa Cruz Museum of Art and History.

Momaya followed up on this topic in the Q&A following Simon’s talk, asking how an activist museum director can address wage disparity and privilege. Though Simon’s talk was called “Fighting for Inclusion,” she responded that the issues of working conditions described by Momaya were “not our fight” — a viewpoint with which I disagree. When museum staff members partner with community members to do museum work, and there’s an imbalance in voice or compensation or decision-making power, that partnership can reinforce rather than challenge social inequalities. If we are to continue promoting inclusion as a value within our field, we will need to put more thought into how to address this tension. How can we persuade museum workers at all levels — including museum leaders — that equitable working conditions are central to inclusion?

Museum Evangelist Adrianne Russell pointed out that the high registration cost (tickets were in the $400 range) (not to mention travel costs!) kept MuseumNext attendance out of reach of many museum workers. I was fortunate to be able to attend the conference with the help of a senior colleague, who let me ride with her from Chicago and even subsidized my lodging! This amazing, above-and-beyond support for an emerging professional from a leader in the field was instrumental — but not everyone can be so lucky.

I concur with Russell that while the free livestreaming went quite far in making the conference accessible to a wider audience, the impact of having a more diverse community of museum workers in the room would have had a significant impact on the conference discourse, especially if the conference had had a more audience-engaged format. Many people followed the stream and engaged the conference topics over Twitter, but having their voices physically present to ask questions and address the presenters in person would be a huge improvement. 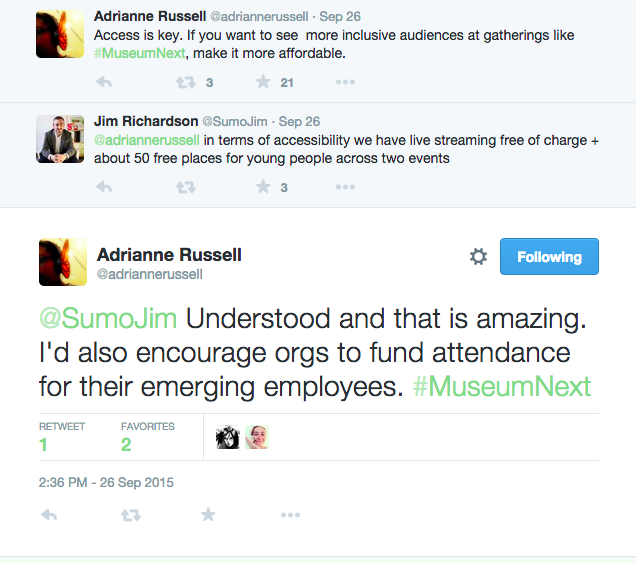 Presenters and participants alike called attention to who was in the room — and who was missing. With a few exceptions, the “sea of white women” (to borrow an apt phrase someone used to describe the museum field at a Museum Workers Speak event in Chicago) was visible both behind  the podium and in the audience. This topic deserves further interrogation. In her presentation, Co-Founder of Brown Girls Museum Blog Ravon Ruffin mentioned the Andrew W. Mellon Foundation Art Museum Staff Demographic Survey and argued, “We can’t talk about museums unless we confront our own privilege to collectively be in this room.”

By far, the most radical and provocative presentations were delivered by women of color — specifically, Co-Founder of Museum Hue Monica O. Montgomery, Momaya, and Ruffin. Those are the presentations I encourage you, readers, to watch or rewatch. Throughout the conference, most of the presentations delivered by white women were operating in the “success story” mode pervasive in the museum field, flattering participants’ current understandings of inclusion without pushing further. Why was the critical role of pushing the field to work harder for inclusion seemingly left to women of color alone? And since they did speak up, will we listen?

Want to continue the conversation started at #MuseumNext?

Join the #MuseumWorkersSpeak tweet chat on Wednesday, October 7 from 2-3pm and 8-9pm Eastern.

Alyssa Greenberg is a doctoral candidate in the Department of Art History at the University of Illinois at Chicago and a founding member of Museum Workers Speak.

The Incluseum is a project based in Seattle, Washington that advances new ways of being a museum through critical dialogue, community building and collaborative practice related to inclusion in museums. The Incluseum is facilitated and coordinated by Aletheia Wittman and Rose Paquet. Contact us for consulting, collaboration or guest blogging at incluseum@gmail.com.