I stood there. My feet were planted – absolutely cemented – to the floor. I was located in the Latin American Art galleries, fourth floor at the Los Angeles County Museum of Art (LACMA). As I walked along my ascribed 50-minute gallery tour, my eyes could not help but scan across three paintings and my feet, certainly, could not turn away.

The trio of paintings belonged to a once larger set of 16 – each depicting a family group with parents of different races and exactly one of their children. The “mixed” couples were set in elaborate outdoor settings, wearing incredibly detailed and ornate attire unique to the cultures (or, mix thereof) that they belong to. A small or large bounty of fruits was located to their left. 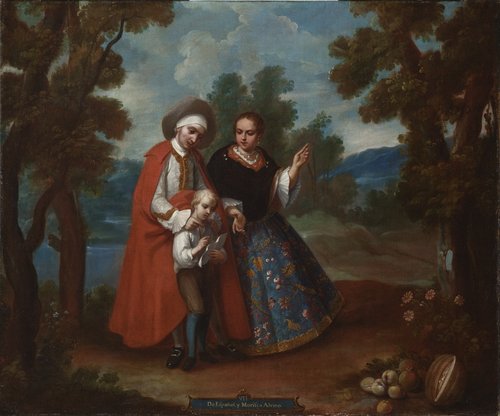 Our guide explained that these were casta paintings. These images, which emerged in Mexico in 1711, showcase race, race-mixing, and the sociopolitical-yet-absolutely-aesthetic efforts to make sense of this mixture.

At the time of the casta genre’s creation, indigenous peoples, Spaniards born in Spain as well as the New World, and Africans brought through the slave industry, populated Mexico. The result? A large percentage of the population were of “mixed-race” – known wholly as castas. These paintings, created largely for a European market, showcases efforts to represent and categorize the process of race mixing in Mexico – complete with a hierarchical arrangement with Spaniards at the very top.

In 2004, these works were showcased among many other casta paintings in the LACMA exhibition entitled Inventing Race: Casta Painting and Eighteenth-Century Mexico; organized by Illona Katzew, leading casta scholar and Curator and Co-Department Head of Latin American Art at LACMA. Since then, LACMA has accessioned the above three casta paintings for themselves! Katzew has placed them in the fourth floor of LACMA’s Art of the America’s Building.

Acquiring these casta paintings was important because it now provides LACMA visitors with the basis to discuss the creation of racial beliefs and their ongoing impact in today’s society (a topic that is especially critical in my home-city, Los Angeles). Thinking more generally – in presenting narratives that address the idea of “mixed-race” through artifacts and art objects alike, museum patrons gain a glimpse into the role that visual representation has played in the creation of race.

WHY DOES RACE FASCINATE ME?

I have always been fascinated with the concept of race, and even more, the concept of being of a “mixed-race” background. This is because I self-identify as such. My mom is Filipina, born and raised in Manila, Philippines and my dad is Mexican-American, born and raised in Azusa, California. They met through the Philippine-American “pen-pal” system, a phenomenon that lies within transnational colonial, militarist, capitalist, and neocolonial histories – a powerplay reminiscent to that of Spanish rule in colonial Mexico represented in casta paintings.

Race also fascinates me because it is a social construction… and because, despite the fact that it is completely made up, it still holds weighty consequences. I argue that different systems of domination, inequality, and difference in our America (as well as Spain’s New World) have actively drawn from ideas of difference, hierarchy, and marginalization stemming, indeed, from race.

A note on “mixed-race” from Michael Omi and Howard Winant, authors of the book Racial Formation in the United States (2015), my emphasis:

To consider an individual or group as “multiracial” or mixed race presupposes the existence of clear, discernible, and discrete races that have subsequently been combined to create a hybrid, or perhaps a mongrel, identity. Here race is functioning as a metonym for “species,” although that connection is generally not admitted in the present day.

Omi and Winant’s understanding that “race is functioning as a metonym for ‘species’” rings loud and clear in my ears. Growing up, I found others, mostly adults, using the term “mixed” to describe me. Flashback to my five-year old self, I imagined myself as a mix of potions – with some crazy scientist mixing a bit of this (Filipina) and a bit of that (Mexican-American) and voila! a baby Angela is miraculously born. This scenario sounds ridiculous, laughable even! Looking back as a now 22-year-old however, I was not so far off. Race is made up – just as my imagined creation story is – and as is my ascribed racial title.

Similarly to Omi and Winant and to myself, scholars and non-scholars alike are groping with the implications of being “mixed” or of being “multiracial” within the once rigid racial structures of the United States. Meanwhile, I have noted museums presenting narratives about mixed race:

I wonder – what with a general narrative so ambiguous – is anyone doing it “right”? And… while we’re on the subject: What is “right”?

It is my intention, as my museum career progresses, to delve into these questions. In thinking of the “correct” presentation of mixed-race narratives, it is important to understand that my thought process must go deeper than just the presentation and interpretation of art objects. In fact, I feel that it is crucial to first grope with the various barriers that people of color, including myself, may have upon even entering a museum institution and how and why such hurdles still exist. This is because understanding how people of color interact with and are involved in the museum conversation may inform how they are represented (or, perhaps, not represented) within museum walls. Among other things, I find that a critical and questioning approach is the best way to reach any measure of understanding. The questions that I have come to intuitively consider based on my experience in the art museum seem to be formalized within the following research questions – imagined by editor Laura Evans of Multiculturalism in Art Museums Today (2014):

Angela E. Medrano is a former Getty MU Education Intern at the Los Angeles County Museum of Art (LACMA) in Los Angeles, California and a current McDermott Intern for Gallery and Community Teaching at the Dallas Museum of Art (DMA) in Dallas, Texas. Her interest in the popular understanding of multiraciality began while she was studying American Studies at Dickinson College in Carlisle, Pennsylvania and couldn’t quite pinpoint her mix (Filipina-Mexican-American) in any history or race-studies books. She looks to further her museum career and understanding of mixed-race dialogue in art museums through education and curatorial internships as well as a future art history graduate program – studying with the mindset of bridging the gap between museum mission statements and the realities of its visitors. She can be reached by email at angelaemedrano@gmail.com.

← A Checklist Toward Creating Anti-Oppressive Spaces Online
On The Move: Events, Workshops & Consulting →