We loved witnessing Leen Rhee’s exhibition, Treemonisha: Celebrating African Americans in Classical Music, develop throughout the 2011-2012 academic year. This project bridges her passion for both classical music and museums and demonstrates how museological practices can help other arts organizations communicate to their constituents. Treemonisha resulted from a highly collaborative, community-based approach to exhibition design and makes a strong case for the use of these rich processess.

What do you think of when you hear the words “symphony concert”? Stuffy suits? Martinis at intermission? Sitting still and trying not to nod off?

True, the format of symphony concerts is still stubbornly old-fashioned. While the culture, ethnic composition, and pace of society has changed dramatically in the U.S. this past century, the presentation of classical music has hardly varied.

The emotional power and beauty of live classical music can be mesmerizing. However, symphonic institutions have been struggling to attract young and diverse audiences. It’s clear that something has to change. 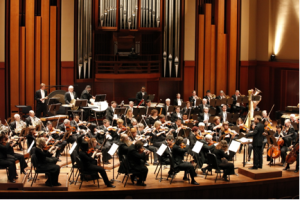 The classical music world is not the only discipline faced with these concerns.  The Center for the Future of Museums (CFM) issued a report in 2010 called “Demographic Transformation and the Future of Museums.” A striking figure from this report shows that museums, too, have been unsuccessful in attracting (and catering to) the rapidly increasing ethnic minority populations. 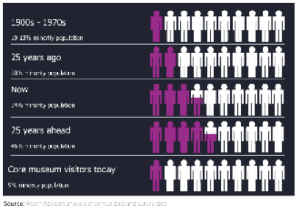 Observation of best practices found in museums demonstrates that in order to increase access and relevance, we should embrace a more culturally responsive and community-based framework, in addition to taking heed of today’s young people.

As I learned more about museums, I had the idea that introducing a museum exhibit model to the concert hall might help symphonic institutions better communicate with new and diverse audiences. So, I proposed this idea to the former education director of the Seattle Symphony, and she responded by requesting I design an exhibit that celebrates the heritage of African Americans in classical music. I knew I wanted to break down previous expectations and barriers of the classical music experience with this exhibit, but now it also had a social agenda to represent and engage the African American community. I was thrilled by this opportunity.

The developmental process of my exhibit was organic, and everything was conducted at the grass-roots level. But telling the story after-the-fact, often skips the anxiety and uncertainty that persists in the beginning of a creative process that has no precedent.  However, the lack of African Americans in classical music is not a new phenomenon and the desire to change that and educate underserved minority groups has been circulating in the local music community for years. If I searched with rigor and clearly articulated my vision, I knew support would follow. (And it did:  Seattle Music Partners, The Langston Hughes Performing Arts Center, Seattle Office of Arts & Cultural Affairs, The Last Quest and the UW World Series.)

One thing I was absolutely certain of was that the exhibit should feature local musicians of all ages and professions. I wanted visitors to see that there are people around them who play, teach, and learn classical music, enriching their lives and the people around them. And the best way to do this, was to meet and interview them in person. (To watch the interview clips on youtube, please visit: http://goo.gl/afr20)

The culmination of this year-long endeavor was a multimedia exhibit titled Treemonisha: Celebrating African Americans in Classical Music. 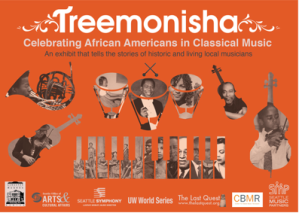 Treemonisha had two successful openings: at the Central District’s Langston Hughes Performing Arts Center and at the UW Meany Hall. A pool of visitor surveys showed a most positive response and a desire to see more concert-exhibits like this in the future. 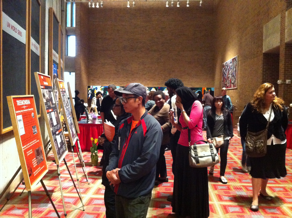 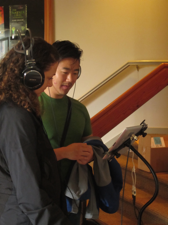 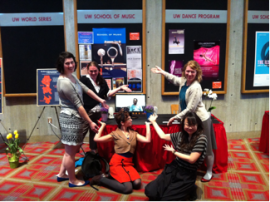 In photo directly above, clockwise from center: Sarra, Aletheia, Niki, Rachel, and Leen, alumni and students of the UW Museology Masters Program

After my thesis defense in June, I went to Dallas to attended the annual conference of the League of American Orchestras.  I participated in sessions related to inclusion, education, and community engagement. Not surprisingly, the discussions and concerns that resonate with orchestra leaders are also what we talk about in museums (i.e. lack of funding, diversity, how to build a sustainable future, etc.). Only, orchestras are even more desperate. The underlying message of the whole conference was “Innovate or Die.” 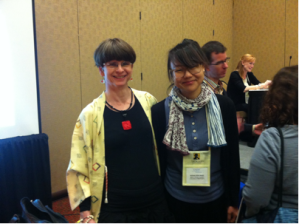 Elizabeth Merritt, Founding Director of the Center for the Future of Museums, was invited to speak in one of the sessions at the League of American Orchestras Conference

We often talk about innovation, creative strategies, and promoting interdisciplinary and community-based collaborations in museums. But what does this entail? What will our new innovative museums or orchestras looks like?

I’ve come to realize that what keeps arts organizations from making radical changes is a fear of this uncertainty. The truth is, no one knows what change is going look like. I didn’t know how Treemonisha would turn out until the physical components started coming together. But thanks to all the supporting organizations and participants who love and advocate music, I was able to tell the true stories of people who are devoted to this art form and believe in its capacity to bring about social change.

Leen Rhee studied music at Brown University and recently graduated from the Museology Masters program at the University of Washington. She would like to learn more about understanding music through the lens of culture and hopes to initiate more collaborations between academia and community arts organizations.  If you would like more info regarding her research or have any questions please comment here or email us at incluseum@gmail.com.

← Comfort and Connectivity: The Museum as Healer
Queer is here and in our Museums! →