If you have been to see the Seattle Reperatory Theater’s production of Pullman Porter Blues by playwright Cheryl L. West then you have witnessed the powerful voices and music that weave throughout the play. E. Faye Butler, Warner Miller,  Cleavant Derricks, and Larry Marshall skillfully sing the play’s blues score; an evocative dimension to the story of three generations of African American men working as Pullman Porters on the Panama Limited train in 1937. 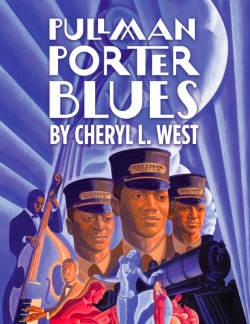 The stories of Pullman Porters, as with most stories of the African American experience, have largely gone untold in dominant narratives of American history.  The omission of African American histories, like those of the Pullman Porters and Maids, is what the Northwest African American Museum (NAAM) works to bring visibility to through their exhibits and programs in Seattle.  When the play was scheduled to run, Deputy Director of Education Brian Carter thought of the objects that the NAAM had from Pullman Porter’s in their collection and decided that it was a great way to bring them to the public in a new way.  The resulting exhibit brings visibility to the lives of real Pullman Porters who experienced both discrimination and economic advancement, albeit one with a glass ceiling, through the occupation (a topic that the play elaborates on.)  Read another blog post about the exhibit written for the Seattle Rep by Deborah Mangold, NAAM’s curatorial intern, here.

NAAM’s exhibit is situated in the lobby of the Seattle Rep right outside the doors leading into the theater.  Before the performance starts, at intermission, and afterward the audience can look into the vitrines to see, among other things, a Pullman Blanket, a porter’s lantern, a book of rules distributed to porters and a ledger (on which detailed inventory needed to constantly be recorded lest you were accused of stealing things and having the cost deducted from an already small salary.)

The NAAM exhibit uses the generational model that Pullman Porter Blues uses to tell different parts of the porter’s experience; the grandfather, father and son.  NAAM also highlights the even more marginalized story of the Pullman Maids and calls for action to recover their stories (a character in the play talks about her life as a Pullman Maid.)  Together, Pullman Porter Blues and NAAM have amplified the story of the porters and maids by pooling their unique cultural resources.  Brian Carter commented:

I was proud to collaborate with the Seattle Rep on this project to explore the often overlooked stories of our community’s Pullman Porters and Maids. Aligned partnerships are a necessity for museums in a climate of shrinking resources, fierce competition for audience attention and a changing world that demands we tell a more inclusive version of our shared human story.

A collaboration like that of NAAM and the Seattle Rep takes advantage of one cultural organization’s voice to turn the moment into a dialogue between organizations about telling the region’s full shared history.

Pullman Porter Blues is playing at the Seattle Reperatory Theater at Seattle Center until OCT 28th.  After the run of the play, the Pullman Porters exhibit will move to the NAAM for an exhibition at the museum.