Spotlight on Research–Subverting the Hetero-Normative Museum

One of our early goals with the Incluseum, was to provide a space where research and practice-based examples of social inclusion in museums could co-exist and, hopefully, inform each other. While most of our recent blog posts have been practice-oriented, we haven’t lost sight of our desire to link in research. Today, Maria Anna Tseliou, doctoral candidate at the University of Leicester, UK, shares with us her research into inclusive curatorial practices and their potential for addressing the hetero-normative museum.

Museums in the United Kingdom are constantly striving to become more socially inclusive of the diverse communities of contemporary society. Increasing the representation of sexual minorities is part of their struggle to remain relevant especially after the appeal of Section 28 of the Local Government Act 1988. This specific section banned any promotion or reference to homosexuality within any local government agencies, including among others schools, museums and galleries. Since its repeal in 2003, there has been a number of curatorial approaches to display sexual differences within museums which are categorised, but not limited to, the following: 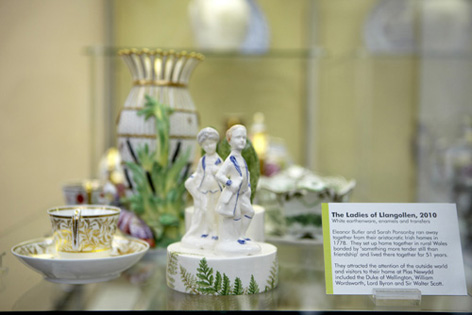 Findings from my research and from other scholars’ studies continuously expose museum practices aimed at increasing the cultural inclusion of sexual minorities as limited. Specifically, some recurring limiting features are:

“the strapline – contemporary art and human rights – … performs as an important ‘framing’ function, closely associating these biennial events with a concept – human rights – which, at least in the abstract, has been found to enjoy almost universal acceptance across different culture, political constituencies and publics.” (Sandell, Dodd & Jones, 2010: 4)

But, adopting a human rights lens is not the only suggestion for museum practitioners who seek to actively promote social justice and anti-discriminatory values. Innovative ways to move towards more inclusive interpretive practices may include:

These approaches allow for more unified narratives to occur and integrate sexual differences with the rest of the collections.

The above examples informed my research provisionally entitled ‘Museums and Heteronormativity; Exploring the Effect of Inclusive Curatorial Practices’, which considers alternative curatorial approaches targeted more broadly at the general audience. Creative approaches allowing for the integration of sexual difference -either thematically or spatially with the rest of a museum collection- were regarded as under-utilized strategies holding great potential. My research is informed by my strong belief in the potential for museums to shape and promote social values with reference to equality, respect for difference, and tackling racism. Due to their high level of trustworthiness, I believe museums are ideally situated to engage their visitors with content they are not yet familiar with.

Producing one-off ‘big gay shows’ like Gay Icons is great. But the real power of museums lies in acting as a forum for debate, a safe place where minority voices can be  heard and where prevailing social norms around, for example, gender and sexuality can be broadened and stretched. Recognising the danger of perhaps diminishing the subtleties of minority groups’ voices, I argue that contextualizing differences of any kind (race, ethnicity, sexual orientation, gender, class, etc.) either under a thematic umbrella or scattered among the permanent exhibitions could be more effective at challenging prejudices than  single-themed projects confined in a temporary gallery space.

Maria-Anna Tseliou is a doctoral candidate in the School of Museum Studies at the University of Leicester, United Kingdom. The provisional title of her thesis is “Museums and heteronormativity; Exploring the effect of inclusive curatorial practices.” Her general research interests are minorities’ and human rights’ representation in museums. She has presented papers at several conferences and symposiums in Oxford, Paris, Leicester, Cambridge, Liverpool and Taipei; delivered Think Tank sessions to Postgraduates; co-edited the volume of Museological Review (Conference Edition 2012, Issue 16) and the e-book Gender and Love: Interdisciplinary Perspectives; and worked as a Research Assistant on a variety of projects for the Research Centre for Museums & Galleries, Birmingham Museum & Art Gallery and London Science Museum. Currently she is working as a Research Assistant for the project iSay: Visitor-Generated Content in Heritage Institutions at the School of Museum Studies, University of Leicester.