In this post, Chieko Phillips, Curatorial Assistant at the Northwest African American Museum in Seattle, Washington, discusses her experience at the 2012 Critical Mixed Race Studies Conference and shares her thoughts on how museums can include multi-racial perspectives. Her perspective adds to the broader discussion of the role museums can play in addressing racial issues. 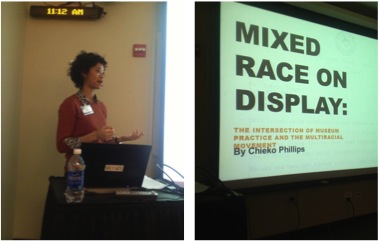 In 2009, when I first learned of a museum exhibit called IndiVisible: African-Native American Lives in the Americas  and two other exhibits that carried messages about multiraciality, I had mixed feelings (pun intended). How could any museum present messages about mixed identity; something that is so fluid and personal to me?  On a less emotional level, since the 2000 U.S. census, the first to allow people to mark more than one racial category, mixed race identity is officially recognized by the government and increasingly visible on a national scale.  Therefore, the representation of the history and experience of those who identify as mixed race has become more frequent in American pop culture.

While many scholars,students, and activists are still working to understand the implications of multiraciality for the racial structures of the United States, museums are already presenting narratives about mixed race and placing these narratives in the context of American citizenship. Are they doing it right? Is anyone doing it right? What is right? I have been exploring these questions for the past 3 years and believe the answers are currently indeterminate but full of potential.

In order to better understand how museums can include representations of people who identify as more than one race, I first needed to understand the larger discussion. I had to learn how scholars, activists, and community members were addressing multiraciality. What were the issues, who were the thought and community leaders, what was the existing research and activism? To clue myself in, I attended the first two Critical Mixed Race Studies conferences, a free gathering that attracts scholars, activists, and the curious. This year, I presented a paper, “Mixed Race on Display: The Intersections of the Multiracial Movement and Museum Practice,” to be sure the work museums are doing was represented at this meeting of minds.

However, as much as I was there to advocate for museums, I was also there to learn and figure out if there really is a place for museums in this conversation. I am happy to report that I found a place for the audience-centered perspective of museum practice, which I will share through two examples.

At a session that stressed the importance of the “critical” in critical mixed race studies, one academic presenter referenced the damage that the New York Times series “Race Remixed” had done in respects to tainting popular understanding of people who identify as mixed race. Though he was not satisfied with the articles’ content, this is not the part of the problem he chose to elaborate on.  He was more concerned with how many people the series had reached. He offered the forthcoming issues of the Critical Mixed Race Studies Journal as a way to undo that damage.

While I agree an academic journal will help disseminate scholarly work about multiracialism, I question how many people will pick up a journal concerned with intersectional identities with a cup of coffee on a Sunday morning. These two publications don’t hail the same audience. I realize that these groups might not necessarily come to museums either. However, it is in my practice of formatting objects and information to be accessible to the public, a group this panelist was concerned with, where I found comfort in my attendance at the conference. These panelists had a common interest with museums, public education, that is worth exploring further. Museums can bring together these academic perspectives with lived experiences and histories to explore and present more critical representations of mixed identity and it’s implications in the US.

Another session about research on racism and discrimination experienced by people who identify as more than one race ended with a question about praxis. How would the conclusions from these studies be employed to intervene with the destructive behaviors identified in the studies? How will the researchers participate in preventing the discrimination from reccurring? Answers were vague and usually included something about starting in the schools. This is where I felt confident. Museum jobs reside in the realm of practice. I am constantly trying to translate museum theory and visitor feedback into exhibits and programs to improve the visitor experience. Can the practice-centered perspective of the museum profession contribute to larger discussions of praxis involving multiracial identity formation? Again, I am not sure of the answer to this and other questions I left the conference with, but I have been reenergized to work towards identifying the answers.

By participating in this conference, I took the opportunity to share a little about what happens in museums with a different, and potentially allied, community. By situating myself in a larger context, I also discovered meaningful research questions to guide me as I continue on my path to understand how museums can best include multiracial perspectives. My journey forward will focus on how museums can relay critical messages about multiraciality and racial categorizations to the public as well as how museum practice can contribute to questions of praxis around multiracial identity formation.

Chieko Phillips is the curatorial assistant at the Northwest African American Museum in Seattle, Washington. Her interest in the popular understanding of multiraciality started while she was studying history at Davidson College and couldn’t quite find her history in any book. It expanded to include the role museums can play in that popular understanding while she was completing her MA in Museology from the University of Washington.  She can be reached by email at cphillips@naamnw.org.

You can read more about Chieko’s experience of the conference on the Seattle Emerging Museum Professionals’ blog.

← Youth and Community Outreach at Seattle’s EMP Museum
Allyship and the Race Exhibit: Reflections Part I →